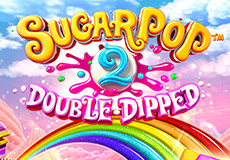 Indulge in the reinvention of Sugar Pop, one of Betsoftâ€™s most popular games. In this incredible sequel, embrace all that was beloved about the original, with cluster wins and candies that explode in a cascade, allowing for additional wins. Revisit the enticing bright colors and welcoming, fluffy, cloud-like dreamland that is the setting of Sugar Pop. But donâ€™t get too comfortable, because things are about to change. In Sugar Pop 2: Double Dipped, everything has been reinvented, from leveling to the candies themselves.

The difference is noticeable right away, as the special candies no longer just appear on the board, but instead come onto the board in a giant chocolate surprise egg! Some of the old favorites get a slight functional makeover, like the caramel chew that now removes all candies of a specific color from the board. But the real highlights to the special candies are the new additions. A Morphing Golden Wild candy will shift and change shape to match any candy near it. The Jelly Bean Cannon fires Jelly Beans into the air, taking out any candies they land on, and the Sweet Hammer slams the board taking out all candies in its way.

Beyond the special candies are new mechanics behind the cluster wins. Clusters of the special Free Spin candy now trigger Free Spins, while large clusters resolve leaving a WILD on the board to allow for further wins. When more than five clusters resolve in a turn, a Candy BOMB will be left behind to clear a large portion of the board, and result in massive wins.

Sugar Pop 2 isnâ€™t just about the individual spin, but, like the original, allows you to level up from spin to spin. Every few levels, a new candy is unlocked and adds to the yourâ€™s special candy list, while increasing your enjoyment. Unlike the original, each new level comes with rewards befitting the prestige of leveling up! Also, unlike the original, Sugar Pop 2 has no level cap! With this sweet sequel the fun never has to end!
Enjoy over 2000 games with a $200 Bonus! Deposit


Tell your friends about it and we might even pay you for that!
Learn more